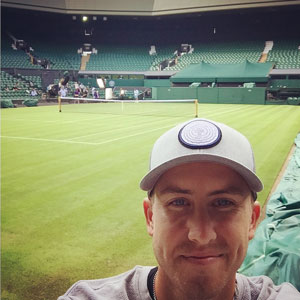 The Paso Robles Sports Club is pleased to announce the hiring of our new Director of Tennis, Devin Barber. Devin’s name may sound familiar to you but his resume may be quite a surprise.

Devin grew up in Atascadero playing on every public court available before any tennis clubs existed. Due to his hard work he reached his dream of playing D-1 tennis for Cal Poly SLO (the only college he ever wanted to attend). While being honored to captain the team his senior year, he realized he loved the coaching and mentoring aspect even more than playing.

Upon graduating with a degree in Sports Management, he moved directly into working with former World #1, Victoria Azarenka. At the time she had assembled the top coaching team in the world. It was there as a hitting partner, and video analysis coordinator that Devin soaked up every single thing he could traveling the world with the most distinguished coaches and staff. Upon Azarenka’s pregnancy, he began working at an Elite Academy with the top juniors in the nation. There he learned what committed “academy life” looked like as he traveled the US as a coach with groups of highly ranked juniors. This caught the eye of the coach to Bethany Mattek- Sands, and he was brought on to work in their academy in Arizona as well as serve as hitting partner, video analysis coordinator and team member. Traveling to all Grand Slams with two different Grand Slam Champions, as well as Fanny Stollar, was the experience of a lifetime.

The culmination of his experiences at clubs all around the world left him wanting to bring excellence in tennis back to the Central Coast and more specifically the North County. “I believe the Central Coast is the most ideal place to live in all the world, and I would love to see high level juniors being developed in the place I love most. It is here I fell in love with tennis, and I believe kids here should have that same opportunity. Junior tennis just seems to have gotten lost up here in the last decade, and my dream is to bring it back”, said Barber.

Devin is certified as a Tennis Professional by the United States Professional Tennis Association. To schedule a lesson with Devin, please contact him via email at dbarber@caclubs.com.

Factory Parking Lot Hours
Monday through Thursday: 5 am to 9 pm
Friday: 5 am to 8 pm
Saturday: 8 am to 4 pm